Favi is officially LAUREAT STANDARD PERFORMANCES. This title is delivered by the french Kennel Club. With 1 CACIB, 1 CAC, 2 RCAC in shows, and 2 CACIL, 1 RCACIL, 1 CACBL, 1 CACP & 1 RCACP, Favi had already all conditions for this at the age of 20 months. We are very proud of her. Two half brothers of Favi (same father - multi Ch. Koseilata's Dust on the Moon) are still available at Keep on Running kennel, in France. We saw them yesterday. They are really beautiful, and have happy & nice character, very curious and not at all impressed with the wide world. With their shiny black coat and white paws, they seem to be wearing smookings ! For more informations: http://crocoblog.keep-on-running.info/ & vice-versa@keep-on-running.info Last coursing of the year for Favi in Merksplas (B). Fifth, 2 points for first place in the first round, a second round against a very fast dog did not allow her to keep this beautiful ranking. She finally ends 11th/19 with 341 pts.
Favi participated in nine events this year, 8 Internationl, 1 national. without zny injury ! She won 2 CACIL, 1 RCACIL, 1 CACBL, 1CACP & 1 RCACP.  Not bad for a beginner ! These good results, combined with those obtained in shows, enabled her to become "LAUREAT STANDARD PERFORMANCE" (homologation pending). We are very proud of her. October 23th, 2011
Entered at the Westerlo Club coursing in Arschot, Favi received one of her worst rankings, placed only 11th/20 bitches. Despite of two excellent races, with fantastic arrivals and spectacular lure capture with brassoc, she didn't received more points than the dogs who were content to cast a glance toward the lure at the finish. We were a little sad because, increasingly, the real attitudes of hunting are no longer rewarded. But most important is that Favi      has once again made ​​two good races, without any injury. And overall, the results of her first season in competition, are exceptional.

Once again, we had a stupid accident in the garden.
Playing with Favi , Indhira broke a finger. The nail had to be removed, and we hope it will not necessary to remove any finger.
His coursing season is of course finished, we hope she will return on the grounds in 2012 to finish his international lure coursing championship title.

October 9th,2011
A very good week-end again. On Saturday, we were at the international lure coursing competition in Amermont, with Favi . She made us very happy one more time, winning the 1st place with CACBL and her second CACIL in just one month ! We call her now "the Terror of the Grounds" !

Less chance on Sunday for Indhira. She finished only 11st / 15. And we were very dissapointed when, asking to one of the judge the reason of this unusual bad classement, he said: "your bitch is a show dog, she could not be able to do something well in lure coursing competition". We think that it is very sad to judge a dog firstly on its look, moreover than the "afghans" awarded today have only few hairs on the ears and the elbows!

On Sunday, Indiana, for her, was entered in Charleroi dog show. See shows page.


October 1st & 2nd, 2011
This week-end, Icyana was entered at the prestigious Eurosighthound, in Italy (more than 500 sighthounds). This Saturday, she got the RCAC from chilan judge  M. R. Podesta (von Haussman kennel). Congratulations ! See shows page.

Today, IntaJeriko came to the racing track in Awans, he made his last "good race", and has now all conditions to get his coursing license. Welcome to the competition, boy ! Excellent lure coursing day again for Indhira and Favi at the international competition in Laferté-sur-Amance (F). Indhira was placed 2nd / 6 with RCACP and Favi got the 4th place / 18 !!

Wonderful results for Favi and Indhira at the international lure coursing competition in Conty (F). Our little Favi , , , ,,  , just 21 months, due to a fantastic first race, won her first CACP & CACIL against 21 competitors. Indhira , for her, finished second and  RCACP. They were also both entered at the Sighthound Specialty show on Saturday, and Falapa National Specialty for Indhira on Sunday. See shows page.

During few holydays in France, we saw in the french magazine "Vos Chiens" that Abd El Shiraz kennel is actually placed second in the Afghan Hound breed at the "Grand Prix des Eleveurs 2011". As Indhira was only shown 1 time in France, this good result was achieved owing to Fabienne, Claude, and Raymond, due to their excellent performance on the french show rings with Icyana and Ismaïlia. Thank you again !

Indhira and Ismaïlia are qualified for the Lure Coursing French National Championship on August 28th in St Maur. We are very happy because it is their first season in competition and they are both already in the bests.

New pictures of Inta-Jeriko, thanks Jeannine! An excellent show Saturday in Switzerland for Indhira and Favi. See show page.

A great Sunday again in lure coursing competition for Indhira and Favi in Gerbéviller (F). Indhira was placed 2nd/7, with 336 pts, and she received the RCACP & her second CACIL !  Favi was also placed 2nd/13 with 357 pts. She got the RCACP & RCACIL.

An excellent week-end again for Indhira and Favi in Paray-Le-Frésil (F). Indhira was placed 2nd/6 with 352 pts, and she received the RCACP & RCACIL ! Favi was placed 4th/14 with 369 pts. As they are again both in the first part of the classement, we have to wait until end of april 2012 to receive their FCI International Working Certificate and enter them in the Working Class in show competitions.
Ismaïlia was also entered in that lure coursing, she finished unfortunately only 5th, with 344 pts, but she has also all the conditions to get her Working Certificate, except "one year & one day", like her sister. Good job, girls !

On Sunday, it was a first disappointment for Icyana. Entered in open class at the specialty show in Versoix (CH), she received only 2nd Very Good. It was quite surprising, as the italian judge, Mrs Zilli, has already placed her 1st Excellent in another show few months ago !

May 21th & 22th, 2011
Wonderful Saturday in lure coursing competition for Indhira and Favi in Vien (B) Indhira was placed 3rd/22, with 358 pts, and most of all, she received her first CACIL ! Favi was placed 8th ex-aequo/25. They both have now half of the conditions requested for the International Working Certificate. It was only their second official race !

On Sunday Icyana and Indiana were entered in Tours (F) and Wieze. See shows page.

May 8th, 2011
Once again, a beautiful result for Icyana. See shows page. 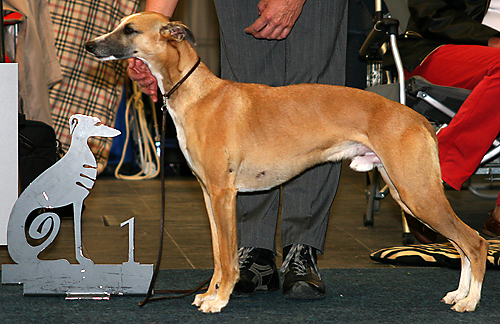 May 1st, 2011
Another fantastic week-end for the show team. See shows page. 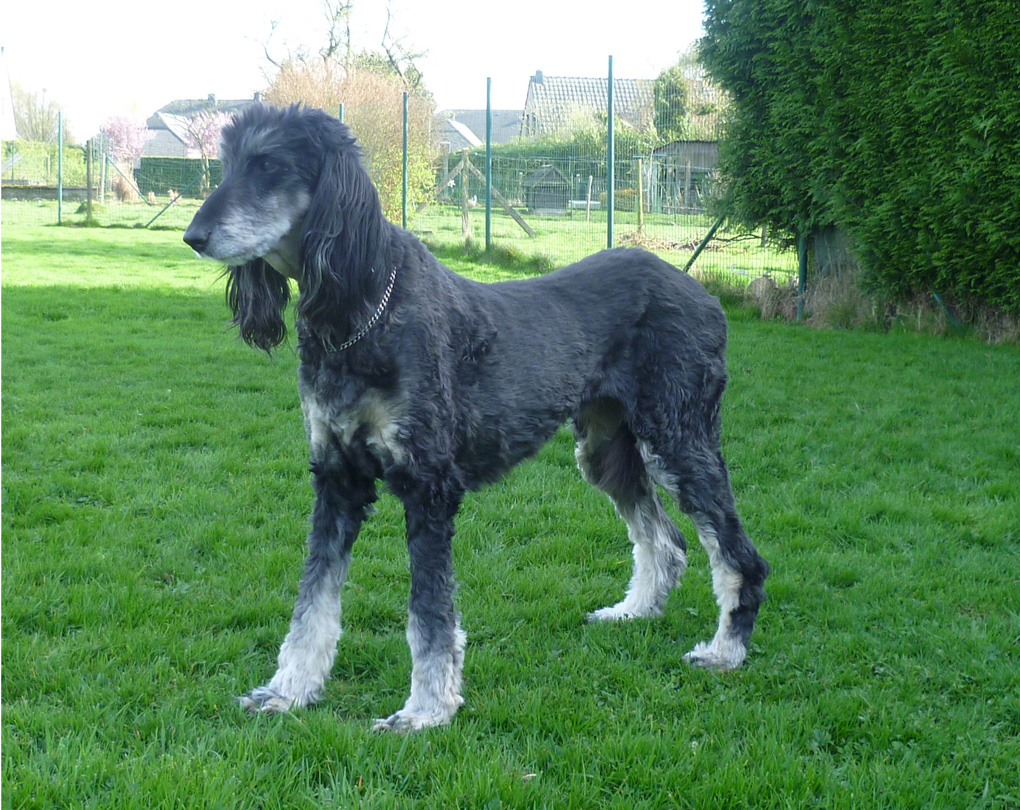 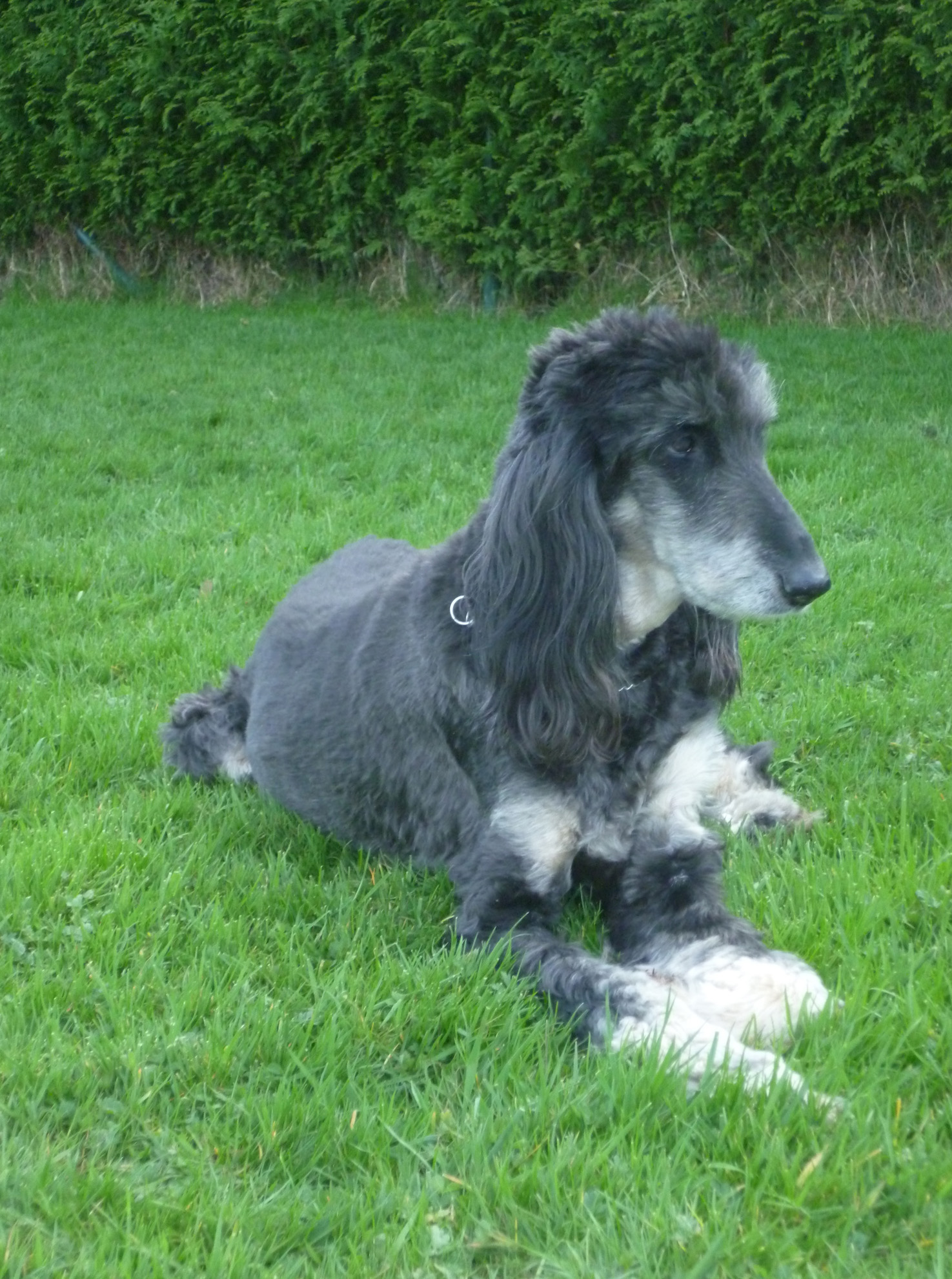 April 23th, 2011
First official race for Indhira and Favi...  at the international coursing in Laferté sur Amance (F). And encouraging results for our both beginners, despite a trial made very difficult by the presence of tall grass 40-50 cm.

Indhira was placed 5th Excellent/8, with 340 pts, and Favi 7th Excellent/10 with 344 pts
Ismaïlia finished 4th Excellent with 345 pts, one step closer to the International Working Certificate. Well done, Raymond ! (who was very courageous to come despite the death of her mother a few days ago, all our thoughts go to him and his family).

April 10th, 2011
The A.E.S. team stayed at home that week-end, but had a wonderful new on Sunday: Favi 's father, Ch. Koseilata's Dust on the Moon, won the CACIL at international lure coursing competition in Axel (NL), he is now International Lure Coursing Champion. Congratulations, Daddy ! We hope that Favi     will walk on your steps !

April 2nd & 3rd, 2011
No show that week-end, but Indhira and Favi  made all their "good races" and are able now to get their official coursing licences and start the competitions, a new world for them !

March 26th & 27th, 2011
Full week-end for the show-team. See shows page.
Promising start in working for Favi  . On Sunday she had the possibility to make a "good race" during the first coursing competition of the year in Vien (B). She was really stunning and we have great hope for her future career.

March 25th, 2011
Regarding to her fantastic results, Icyana has now her own page. Click.

March 19th & 20th, 2011
Another super sunday for Icyana at international dog show in Montluçon (F) See shows page.
On Saturday, her sister Ismaïlia finished #2 Excellent at her first coursing competition of this year. She won also her first Beauty-Performance Challenge !

March 5th & 6th, 2011
Nice week-end for Indhira, Bahiya and Favi.
On Saturday Favi  has been examinated by the Measurment Commission of the CCL. She was officially measured at "less than 48cm", she is now able to make her 3 "good races" to get a coursing licence and begin her working career.
Official results can be seen on http://www.cwrccl.be/fr/Mesurage_Cal.aspx

On Sunday Indhira, Bahiya and Favi  were entered at "Junior & Veteran Day" in Geer (a show for dogs old less than 2 years and more than 6 years). See shows page.

The Top-Hounds rankings are published. With only few shows in adult classes, Indhira ended 2010 with a very nice 3rd place in the ranking of the Belgian Afghan Hound Club. Indiana and her sister Ismaïlia are respectively 6th and 9th. Congratulations girls !

You can see the complete ranking on the BAHC website :
http://www.bahc.info/top_afghans_2010.htm